Adam Jobs was Wahlberg, Meliadoul, and Innocent Zero's master. He's said to be the architect of what would become the Divine Visionary and the founder of the Bureau of Magic. The current society of magic users was built by him.

He had vast Influence over all Community but his later years were spent on the public assistance of those unable to use magic.

Despite his serious appearance, he's been shown to have a sense of humor as he joked around with Wahlberg in the past. Unlike the majority of the country, Adam bared no ill intent with magicless people and saw it as his goal to assist them.

Not much is known about Adam's origins, except that he was the first Divine Visionary, after he awakened the power of Gods. He surpassed everyone and unified the entire magic realm after single-handedly vanquishing the forces of entire nations.

Dark (ダーク, Dāku): Adam's personal magic. It allows him to manipulate darkness, that returns everything it hits to the void, effectively erasing its targets from existence. It's stated that it is impossible to counter it directly with magic. However, Ryoh Grantz's Lights appears to be a natural counter to it.

Dark Snake Double (ダーク・スネーク・ダブル, Dāku Sunēku Daburu): A stronger version of Dark Snake, where he summons two snake-like apparitions instead of one.

Immeasurable Magic Power: As a Triple-liner, Adam had incredible magic power. His magic power was said to be "divine" and according to Ryoh Grantz, there were none who could stand up to Adam's Dark Magic.

In a flashback, Adam was seen with a transformed magic staff. The name and abilities of his summoned god are currently unknown. His wand transforms into a skeletal scythe that enhances his magic.

Wahlberg: A pupil of Adam. Wahlberg is shown to immensely respect Adam and puts him on a pedestal.

Innocent Zero: Also a pupil of Adam. Equal or greater in strength to Wahlberg.

Meliadoul: The third pupil of Adam's and was stated that she was stronger than Wahlberg in her heyday. 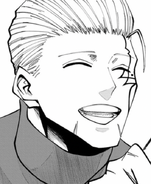 Adam while he was alive