Cell War is a member of the criminal organisation Innocent Zero and a supporting antagonist in the Magia Lupus and Divine Visionary Selection Exam arcs.

At some point in the past, Innocent Zero created Cell from a corpse, using his own blood.

Spell-Reflection Mirror (魔返しの鏡 Ma-gaeshi no Kagami): In addition to his wand, Cell wields a powerful, magical item that reflects any and every spell cast its way. The stronger the spell, the more fearsome the mirror makes it. According to Dot Barret, it's said to be one of the most powerful and feared magical items in the world. It is later shattered by Mash Burnedead.

Carbo (カーボ, Kābo): Cell's personal magic that allows him to create and attack his targets with black blades made out of obsidian. He can create his blades at an alarming speed, making it difficult for his opponents to react to his attacks. In addition, Cell can also use the obsidian he creates to form large constructs such as a tower.

Transformation: Cell is able to change his appearance through an unnamed spell, as he took the form of Lance Crown when he first entered Easton Magic Academy.

Control Magic: Cell possesses a magic that allows him to control humans like puppets, similar to Marioness. Cell used this to force Abel Walker to strangle himself.

Gravity Magic: Cell possesses a magic that allows him to control gravity, very similar to Graviole, if not the same. Cell uses it to levitate and to push away attacks, as well as obstacles away from him. This magic, alongside his transformation spell, allowed him to impersonate Lance Crown.

Protective Skin: Cell possesses an unnamed magic spell, that grants him a protective armor made from an unidentified mineral (likely the same as his Carbo) on his skin, which he can activate instantly. It's strong enough to protect him from a simple strike from Mash. When he uses his Summon Hephaestus, his armor changes into much harder diamond. While the evolved form of the spell grants him an even greater amount of defense against physical attacks, it does not protect him from asphyxiation, as his throat could still be squeezed with enough force to prevent him from breathing.

Immense Magic Power: As a triple-liner, Cell possesses an immense amount of magic power. Rayne Ames compared Cell's power with that of the Divine Visionaries.

Hephaestus (, Hepaitosu?, Kanji meaning "God of Iron"): As a triple-liner Cell possesses the ability to call upon a god's strength from within his wand. He calls forth the god of iron. His wand transforms into a thorned staff with four ring-shaped diamond rings, two on each end. Cell's magic power increases immensely, allowing him to cast much stronger diamond-based spells. 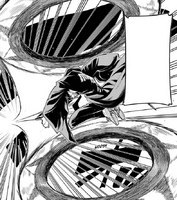 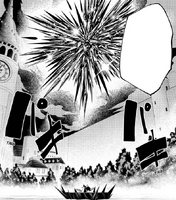