Innocent Zero is the alias of the leader of the criminal organization of the same name and the primary antagonist of the series. He was once a pupil of Adam Jobs alongside Wahlberg.

Innocent Zero can freely alter his appearance through unknown means. His default form being a faceless humanoid. He can, if desired, change to his past self's appearance, which he did so during his battle with Wahlberg. 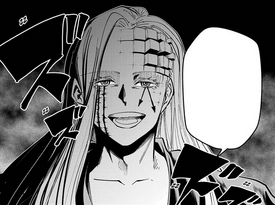 His former appearance as Adam's pupil.

Innocent Zero is a very selfish person, as he believes everyone is born for his sake. He desires to "absorb" Mash to become "The Perfect Human Being". He also views himself to be "more human" than anyone else.

After Cell War returns from Easton Magic Academy, he tells Innocent Zero that he has found what was lost. Innocent Zero says that he can finally have his wish and asks Cell to retrieve it for him.

Wand: Like most mages, Innocent Zero wields a wand.

Timez (タイムズ, Taimuzu): Innocent Zero's personal magic. This magic allows him to manipulate time in various way. He can accelerate, slow down and he is even able to stop time for those around him, allowing himself and targeted people to move freely. Most impressively, Innocent Zero can even reverse time and nullify taken actions, such as Thirds spells. So far, only Wahlberg appears to be able to counter Timez to some extend. Wahlberg states that Timez is the most powerful personal magic.

Magic Stealing: Innocent Zero can steal other's magic, such as Dark from Adam Jobs and Spaces from Wahlberg Baigan. His body, however, is unable to properly contain all of the magic power.

Shapeshifting: Due to various experiments on his own body, Innocent Zero possesses the ability to alter his own appearance.

Magma Magic: Innocent Zero can summon magma infused with the power of darkness. Anything that it touches will be absorbed by Innocent Zero without a trace.

Immeasurable Magic Power: Even for a triple-liner, Innocent Zero possesses a truly monstrous amount of magic power. Wahlberg even states that it's not a stretch to call Innocent Zero the strongest magic user. Due to his true nature, his lines are not visible and only appear when he activates his wand’s true form or changes his appearance to make them visible.

Chronos (, Kuronosu; Kanji meaning "God of Time"): As a triple-liner Innocent Zero possesses the ability to call upon upon a god's strength from within his wand. He calls forth the god of time. His wand grows in length, with the tip transforming into a clock surrounded by blades. By summoning Chronos, Innocent Zero's magic becomes much more powerful.

Uranus (, Uranosu; Kanji meaning "God of Sky"): Having stolen Wahlberg's personal magic, Innocent Zero got access to this Summon. Innocent Zero calls forth the god of sky. His wand transforms and a mysterious orb surrounded by 4 nails, with one of the nails as his wand's tip, appears. Like with his original Summon, by summoning Uranus, Innocent Zero's magic becomes much more powerful.

Adam: Master/Teacher. Adam was a very powerful sorcerer. Wahlberg and Innocent Zero were his strongest pupils.

Wahlberg: Ex-friend/co-pupils of Adam. The only person capable of stopping Innocent zero is Wahlberg.

Doom: Oldest of his children.

Famin: Second oldest of his children.

Epidem: Third oldest of his Children.

Delisaster: Fourth oldest of his Children.

Mash Burnedead: Youngest of his children.