Lance Crown is a first-year student at Easton Magic Academy and the Deuteragonist of the series.

Lance is a slim, long-legged man with short blue hair, he has two vertical marks running from under his right eye down his full face, he has two accessories an ear piercing in his left ear which takes the shape of a planet that has planetary rings and a necklace locket that contains an image of his younger sister Anna.

Lance wears the usual Easton Magic Academy uniform which consists of a long-sleeved, button-up white shirt, a black robe, and a red tie along with black pants and brown shoes.

When Lance was younger he is shown to be a very caring person who was willing to protect people who were being mistreated by other people even if the repercussions are him getting into fights.[1] Lance is very protective of his sister where he vows to become a Divine Visionary so he can save his sister from being taken by the Bureau of Magic.

Lance was born into a common family. Both of his parents and sister are all single marked mages while he has two marks. When he was younger, his sister would worry for him because Lance would get into fights to protect people who were getting bullied. When she became gravely ill with an incurable disease that would take away her magic and mark, his parents showed great disgust in their own daughter's condition which infuriated Lance to the point where he disowned his parents and decided from then on he will become a Divine Visionary to save his sister.

Lance ranked first place in the entrance exams and was accepted by Easton Magic Academy as a student, where he is slowly getting closer to his goal of becoming a Divine Visionary.

Lance first appears when he asks Mash, Lemon, Finn and Tom if he could join their study session. Lance proceeds to attack them using an ancient magic tool that then seals Lemon, Finn, and Tom within a glass bottle and tells Mash to meet him in the forest behind the owl shed. Mash meets him there and Lance's true motives are revealed which is to test Mash's capabilities, with Silver Coins being the reward for winning.

After a quick fight, which results in Mash grabbing lances locket, Lance proceeds to taunt Mash by dropping the glass bottle off the side of a cliff. As it falls, Mash uses an ability called Big Bang Dash to instantly catch the glass bottle for it to reveal that it was a fake bottle and that Lance had never intended to kill the three in the bottle after Mash had instantly swiped the bottle with his friends. Lance leaves defeated giving Mash the two silver coins.

Later Lance approaches Mash and Finn to reconcile, in House Adler's dorm Lance teaches the pair in silencing the screams of a Mandragora, which results in Mash always turning his potion into a cream puff even when Mash follows all steps completely.

Graviole (グラビオル, Gurabioru): Lance's personal magic. Graviole is a magic that allows Lance to increase gravity at will, making it impossible for any normal human to withstand. The gravitational forces Graviole creates can be precisely controlled, making this Magic highly versatile.

Great Magic Power: As a double-liner, Lance possesses a great amount of magic power. Lance can easily do any spell that is taught in the first year of Easton Magic School.

Culinary Expertise: Lance appears to have a talent for preparing food. He was able to swiftly prepare a compound made out of a Mandragora.[2]

Lance is very protective of his little sister and will do anything for her, even making his goal to become a Divine Visionary in order to save his sister from being taken by the Bureau of Magic.

Lance with a Mandragora 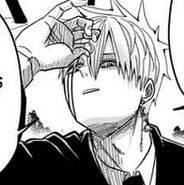 Lance talking about his sister