Lemon Irvine is a first-year student at Easton Magic Academy.

Lemon has medium, blonde and hair with an orange ribbon. Her mark is under her right eye, straight with a half-moon curve. Usually wears the Easton Magic Academy uniform.

Lemon is a little cooky, but she's honest to goodness person and seems incapable of betraying others. She also gets scared very easily and tends to exaggerate in the conversations she has with other people.

She was raised in a poor family and that encouraged her to apply to the Easton Magic Academy to earning money to help her family. In the apply exam, she tried to stop Mash because Claude told her, but she was shocked about Mash's honesty and she told him the truth. Since that moment her heart belonged to Mash.

Magic Power: As a single-liner, Lemon possesses an average amount of magic power.

Self-proclaimed future husband by her. It is evident that she has a crush on Mash, seeing as she blushes around him. It is even stated in the manga itself. 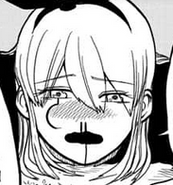