Margarette Macaron is the prefect for Orca Dorm. She is an antagonist of the Divine Visionary Selection Exam Arc.

Margarette appears as a tall masculine-looking person, while having her true magic power sealed off.

She takes on a more petite and feminine appearance in her true form. 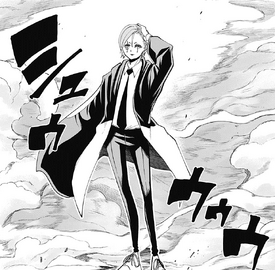 Margarette is eccentric, yet a firm believer in "Might makes Right". She has a strange obsession with Tartar Sauce.

Wand: Margarette wields her wand like a conductor's baton. The handle of her wand is shaped like a musical note.

Sounds (サウンズ, Saunzu): Margarette's personal magic. It creates music notes of various different properties, such as exploding or shielding ones. She can also use her magic to create music notes that can cushion her fall. In addition to music notes, Margarette can summon various music instruments such as a piano.

Nalcos (ナルコス, Narukosu): A basic magic spell that Margarette uses to test her opponents. It shoots a magic bullet at a target. Margarette's bullets are much more powerful than those of average wizards. According to Mash, they are "as heavy as bowling balls".

Immense Magic Power: As a double-liner, Margarette possesses a great amount of magic power, however, her true magic power exceeds that of the average double-liner, as she usually hides her true strength by sealing a part of her magic power.

Musical Talent: Margarette is a highly talented pianist and maestra. She's supplementing her magic with her knowledge of music.