Rayne Ames is a second year student at Easton Magic Academy, a Divine Visionary and the current prefect of the Adler Dorm.

Rayne is a young man who has blonde hair on the right side of his head and black hair on his left, light-colored eyes and three magic marks on his face, one of which is located beneath his right eye and the remaining two which go down his left.

Rayne usually has a serious, cold and somewhat detached demeaner. His neutral and unenthused facial expression generally never gives away what he's really feeling, however, underneath that coldness he does have a tendency to care for others and protect those he's fond of or takes an interest in. On the other hand, when it comes to his enemies he will show no sympathy or mercy and is more than willing to be cruel to them and torture them to get what he wants.

Little is known about his origins, however, at some point in the past, Rayne Ames was born into the Ames Family alongside his brother: Finn. His parents passed away when he was a child, and him and Finn were moving around often since none of their relatives wished to house the orphans. He began attending the Academy two years prior to the start of the story and despite his young age he has made considerable strides since his enrollment, becoming one of the school's top students.

Rayne Ames is first seen in a newspaper article standing before a group of reporters with the announcement to the public that due to his stellar achievements over the past school year, he has now become the new Divine Visionary of Easton Magic Academy. Due to these achievements, he is elevated to the rank of nobility and given a hefty sum of money as a reward.

He is later seen returning to the Academy after briefly taking a short trip away, with the Headmaster promptly requesting by letter that he is to immediately check the basement of the school, which the latter does begrudgingly. Once there, he discovers and saves a tired and wounded Dot and Finn both of whom were trapped underground and nearing the end of their rope after Dot's fight against the Fifth Fang of the Magia Lupus - Love. Rayne makes quick work of the Fourth Fang who had previously revealed himself and had almost finished both of the first years off, catching him off guard and breaking through his spell instantly. Now battered and bruised and stricken with newfound fear, the Forth Fang attempts to talk his way out of his predicament while trying to launch a secret attack but to no avail and it ends quickly with Rayne telling him to not waste his time. Rayne summons over a dozen swords, Rayneing them all down on the Forth Fang who is shocked at Rayne's prowess despite the latter being only a student like them. Seeing that he has no hope of victory, the Forth Fang tries to ask for forgiveness for his actions, however, Rayne shows him no mercy and kicks him repeatedly, stating that the only way for scum like him to actually learn their lesson was through pain, pain so excruciating that he'll never make the same mistake twice. He turns around and tells Finn and Dot to leave while he continues his torture to find out more information.

After getting the information he needed, Rayne once again sets off down the dark corridors of the dungeon to continue his investigation on Innocent Zero and soon has his first encounter with Mash Burnedead. He feels the immense pressure surrounding him and at first suspects Mash of being an enemy, immediately taking a fighting stance and attacking him with a sword, which Mash stops with just two fingers. Growing suspicious, Rayne increases his magic output to 3% and then to 10% to test Mash's strength. When Mash blocks all of his attacks, Rayne asks for his name and immediately recognizes it as that one student that the Headmaster told him to look out for. After giving him a magical handkerchief (covered in cute bunnies) to heal his wounds, Rayne tells him that if he aims to be Visionary without magic he's going to have a difficult time but if he beats Abel Walker, he'll be one step closer to becoming a candidate for the position. He tells Mash that he would like to have at least one strong ally in a world with a never-ending list of problems and that if he really aims to be Visionary then he needs to do it even if it kills him. The pair part ways shortly thereafter with Rayne remarking that if Mash wants to become a Divine Visionary without any magic, he's going to have to prove himself to be greater than any magic user.

When Mash is discovered by the Academy for being unable to use magic and is put on trial to decide his fate, Rayne appears with the Headmaster and requests for the first year to be pardoned, stating that Mash has proved himself trustworthy.

Partisan (パルチザン, Paruchizan): Rayne's personal magic. It grants him the ability to summon an unknown amount of swords at will. They are very fast and highly destructive weapons. It is currently unknown what their maximum range is or if there is any limit on the amount of swords he can summon at a time.

Arachnabus (,): Rayne summons an eight legged spider called Arachnabus which has the ability to judge a mage's true magic power.

Immense Magic Power: Being a Divine Visionary and a triple-liner, Rayne possesses an immense amount of magic power and skill.

Ares (, Aresu; Kanji meaning "God of War"): As a triple-liner Rayne possesses the ability to call upon a god's strength from within his wand. He calls forth the god of war. His wand transforms into a black trident, giving him godlike power. By summoning Ares, Rayne's magic becomes darker and much more powerful. His regular spells become as powerful as Secondth Magic spells. 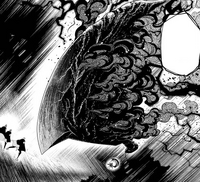 Rayne appears to treat Finn very poorly. He is very judgmental towards Finn's wish to help everyone who is fighting and even tells him to leave Easton Academy for his weakness. Rayne goes as far as to tell Finn that the latter is a burden even after he tried and succeeded in opening the path into Innocent Zero’s lair and stops him from helping in fighting. However, Rayne has distanced himself from Finn out of fear that he might be targeted with Rayne becoming a Divine Visionary and working to create a world that is fair to orphans like themselves, which could cause societal backlash. Finn, on the other hand, feels that Rayne's measures to protect him are unnecessary and just wants to be close with his brother. They seemingly make up after Finn miraculously uses a Secondth spell and fights Delisaster together with Rayne,

Despite originally mistaking him for an enemy, Rayne seems to respect Mash, fighting against Margarette Macaron, one of the strongest students enrolled at Easton Magic Academy, in order to protect him.