Renatus Revol is a Divine Visionary and a member of the Magical Cemetary Administration, a subdivision of the Bureau of Magic.

Renatus is loud, obnoxious, and a complainer.

Invasion of the Magic Capital Arc

Wand: Renatus wields a wand in the shape of a human's finger.

Illusion Magic: In addition to his personal magic, Renatus also appears to be skilled with illusion-type magic, as seen in his and Agito's short fight with Domina.

Immortality: True to his epithet, Renatus is an immortal and cannot be killed by conventional means. He can reattach lost limbs and regenerate at an extreme speed. Renatus's regeneration has its limits, as he was unable to keep up with Doom's attack speed.

Immense Magic Power: Being a Divine Visionary and a triple-liner, Renatus possesses an immense amount of magic power and skill. His third line has yet to be revealed.

Thanatos (, Tanatosu; Kanji meaning "God of Death"): As a triple-liner Renatus possesses the ability to call upon a god's strength from within his wand. He calls forth the god of death. He pierces his wand into his body and transforms it into a skeletal scythe similar to Adam Job's Summon. By summoning Thanatos, Renatus's magic becomes much more powerful. 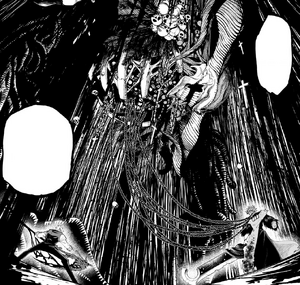