Wahlberg Baigan is the Headmaster of Easton Magic Academy.

Wahlberg has long gray hair, a beard, and eyes. He wears glasses, a dark-colored fez, and clothing.

After his battle with Innocent Zero, the right half of his body has darkened and withered due to forced aging.

Never afraid to use his power to reprimand others that are under his authority or that he's responsible for. Wahlberg is overall a calm and understanding individual.

In the past he was a Divine Visionary. He was the only one who could stand against Innocent Zero. Wahlberg and Innocent Zero both learned from their master/teacher, Adam.

Upon seeing Mash complete the labyrinth trial with his muscle-bound ingenuity, he becomes rather fond of the young man.

Spaces (スペーズ, Supēzu): Wahlberg's personal magic. It allows him to control space itself. He can also transport people in a separate sky-like dimension with it. It's later stolen by Innocent Zero.

Ancient Soul Spell: In addition to his personal magic, Wahlberg can cast an ancient spell that targets opponents most cherished person and extracts their soul and instantly transfers it into a straw shaped doll. This spell seems to have a kind of monster that controls the knife. If the knife were to stab the doll the soul of the person shall never return leading to their death.

Magic Dispelling: Wahlberg is capable of nullifying or protecting others from the effects of time-halting magic.

Levitation: Using magic, Wahlberg is able to hover in mid-air.

Immeasurable Magic Power: Being a triple-liner, Wahlberg possesses an immense amount of magic power and skill. His first line is always visible but the other two lines are hidden under the same eye and only appear when he activates his wand’s true form. Wahlberg is considered to be one of the greatest magic users in the world. Wahlberg can induce an immense amount of fear into others by merely exerting his magic power, which is visually represented by an ornate axe cutting through them. Wahlberg is also among the very few triple-liners, who have access to Thirds, the epitome of magic, however, his personal magic is later stolen by Innocent Zero, preventing him from casting his Thirds ever again.

Uranus (, Uranosu; Kanji meaning "God of Sky"): As a triple-liner Wahlberg possesses the ability to call upon a god's strength from within his wand. He calls forth the god of sky. His wand grows in length and a mysterious orb surrounded by 4 nails, with one of the nails as his wand's tip, appears. Wahlberg can individually control the nails of his Summon to warp space from different directions at the same time. By summoning Uranus, Wahlberg's magic becomes much more powerful. Like with his Spaces magic, his Summon is later stolen by Innocent Zero. 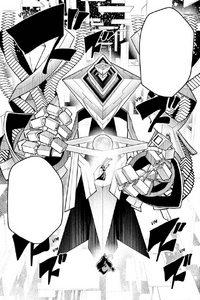 Adam:- Master/Teacher. Adam was a very powerful sorcerer. Wahlberg and Innocent zero are his strongest pupils

Innocent zero:- Ex-friend/co-pupils of Adam. The only person capable of stopping Innocent zero is Wahlberg